FourByThree proposes the development of a new generation of modular industrial robotic solutions that are suitable for efficient task execution in collaboration with humans in a safe way and are easy to use and program by the factory workers. The diffusion of lightweight robots is widening the opportunities of their use in manufacturing cells. In particular, the hardware adaptability to different operative conditions enables new challenging scenarios like, for example, those of co-presence of END_OF_DOCUMENT_TOKEN_TO_BE_REPLACED This year, the FourByThree consortium has also worked towards hosting a special session at IEEE’s conference on Emerging Technologies And Factory Automation (ETFA), which will take place in Limassol (Cyprus) on September 12-15 2017.
END_OF_DOCUMENT_TOKEN_TO_BE_REPLACED Last week, IK4-TEKNIKER hosted an Integration Camp and Plenary Meeting of the FourByThree consortium. During the Integration Camp the main components developed in the project by different partners were tested and integrated.
END_OF_DOCUMENT_TOKEN_TO_BE_REPLACED The most recent version of the Roadmap was published in November 2016. In a previous article, we discussed some of the emerging trends in this new Roadmap which have been added since the 2009 version.
END_OF_DOCUMENT_TOKEN_TO_BE_REPLACED 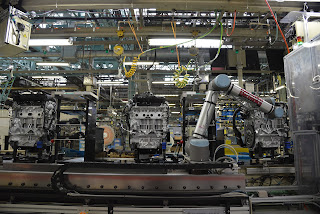 Shermine Gotfredsen, General Manager, SEA and Oceania, said, “We are excited to be working with Nissan in their automation journey. The global automotive industry plays a key role in driving the adoption of collaborative robots (cobots) to produce better manufacturing output, and this is critical for industry players to stay competitive. Universal Robots is at the forefront of this trend; our cobots effectively support process automation, resulting in improved safety standards and less strain on human employees. This can be applied not only in the automotive industry, but also in the manufacturing of electronics and electrical, pharma and chemistry, and food and agriculture.”

Cobots are an offshoot of traditional industrial robots. They are lightweight and mobile in terms of deployment, and are flexible enough to be modified for different applications. The automotive industry uses cobots in a wide variety of processes including handling, assembling, packaging, palletizing, labelling, painting, quality control and machine tending. The market value for collaborative industrial robots in the automotive industry was US$23.56 million in 2015 and is projected to reach US$469.82 million by 2021, at a CAGR of 64.67% between 2015 and 2021.

The automotive industry in SEA is poised for great growth with large markets experiencing important sales growth. As a key manufacturing hub producing for Asia and the world, SEA’s automotive sector has grown at 11% CAGR between 2010 and 2015[1]. The upcoming implementation of Association of South-East Asian Nations (ASEAN) Free-Trade Area is expected to lower import and export taxes in the region, further driving demand for cost-effective regionally manufactured vehicles.

Nissan Motor Company needed to streamline its production process at its large-scale Yokohama plant. The company also needed to manage labour costs with an aging workforce and the associated loss of vital skills.

Mr Nakamura, Expert Headman for the plant’s Engine Section, said: “We needed a robot large enough to carry hefty intake manifold components, weighing up to 6kgs. On comparison with other companies’ robots, we selected the UR10 due to its cost advantages for a single robot, as well as its weight capacity. In the process of installing the intake manifolds, only the UR10 robot arm had the payload of 10kg among the other products we considered.”

Universal Robots’ cobots are collaborative industrial robot arms that can automate processes and tasks that weigh up to 10 kg, and require precision and reliability. With a reach radius of up to 1300mm, the cobots are designed to be more effective at tasks across a larger area, and can save time on production lines where distance can be a factor. Universal Robots’ cobots are easy to program and set up. They are designed to work alongside humans, as a tool, to help simplify and speed up tasks that might be complicated, or require greater physical strength.

After deliberating on the range of safety and features required, Nissan decided on using the UR10 robot arms which were easily installed, programmed and operational within a week. The deployment of UR10 robot arms at Nissan reduced production time and quality as well as allowed employees to be relieved of monotonous tasks, allowing them to obtain valuable line experience elsewhere.

Subsection Chief of Engine Section Mr Onishi said: “We are able to quickly respond to potential production time overruns as we can easily move the UR10 to work on any process in the plant where the issue has been identified. We plan to further the use of cobots by integrating the strong on-site and engineering capabilities, which will increase our level of cobots deployment going forward.”

For more details on how Nissan Motor Company is using UR10 robots please click here.