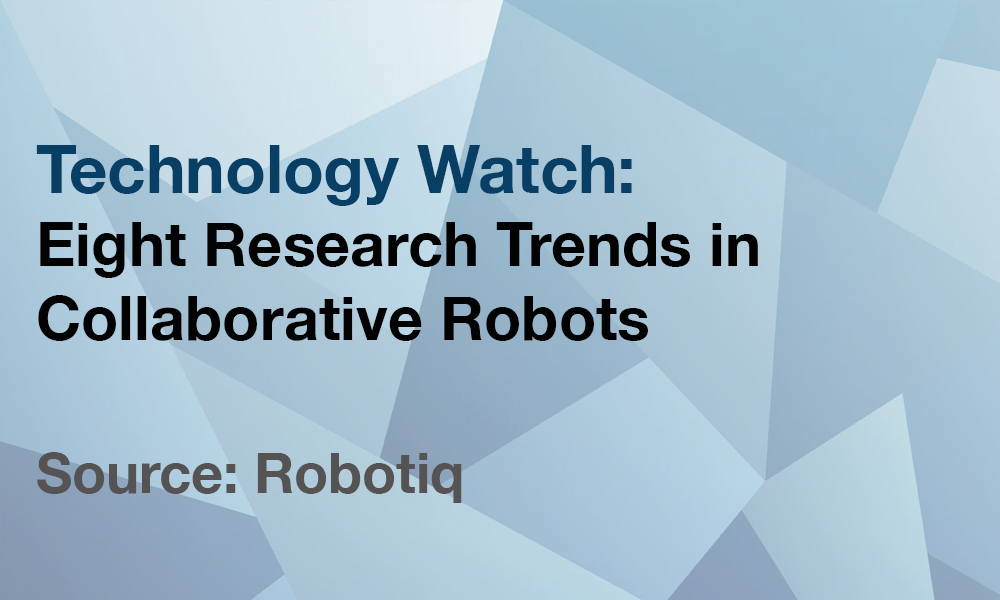 The most recent version of the Roadmap was published in November 2016. In a previous article, we discussed some of the emerging trends in this new Roadmap which have been added since the 2009 version.

The Roadmap presents research goals in various robotics fields, with specific targets for the next 5, 10 and 15 years. Although predictions like these are often unreliable, they give a good indication of the current direction of robotics research and provide a picture of what we can expect over the next decade.

For collaborative robotics, the most important avenues of research will be improving the quality of human-robot interaction.

Physical robotic systems are already beginning to meet the requirements of manufacturers and researchers. However, progress is still needed in the collaborative control of robots. We have seen a lot of intuitive programming systems over the last few years, but advanced collaborative interaction is still in its infancy.

Robotic hardware has changing a lot over recent years. Collaborative robots are a perfect example. There is a move away from the fast, rigid industrial manipulators of the past towards robots which can operate side-by-side with humans.

The design of human-safe robots presents a variety of problems for researchers. Safety and performance do not always go hand-in-hand, especially when it comes to speed and accuracy. Researchers and robot manufacturers have to make a lot of decisions, such as whether the compliance of robots should be active — implemented in software — or passive — integrated into the physical design.

Over the next five years, researchers hope for increased adoption of compliant robots into the industry. We are already starting to see this happen. Over the next 10 to 15 years, this will develop to incorporate more complex types of collaboration with human operators. Eventually, the aim is that collaborative robots will act as partners rather than just tools.

The industry is beginning to recognize the benefits of more standardization in robotics. This is also becoming recognized within research, where there has long been a lack of standardized benchmarking practices.

As robotic technology grows, so do the needs of robotic interfaces. Interfaces need to handle more complex scenarios whilst also being simpler, so that less experienced operators can use them. Over the next five years, there is a research push towards generalizable guidelines and standards for robotic interfaces. Over the next 10 to 15 years, these will incorporate scalability and accessibility. Authoring tools may be developed so that users can easily design and implement their own interfaces.

As robots work closer with humans, there is a great need for them to be able to respond to users and adapt their behaviors. As a research field, this type of adaption is still relatively young.

Over the next five years, researchers need to work on recognizing basic human behaviors and adapting the actions of robots to respond to them. Over the next 10 to 15 years, this should develop into on-the-fly reprogramming and adapting to the needs of complex tasks.

Social interaction is particularly important to the field of social robotics; however, it is just as relevant for industrial robotics. Eventually, collaborative robots will need to be able to interact with human operators in a dialog. This will involve more complex interaction than the current programming methods.

Over the next five years, research will need to work on giving robots the ability to model and track the state of a user in a controlled setting . Over the next 10 to 15 years, they will develop the ability to adapt to changing user states and operate with diverse types of users.

Currently, collaborative robots operate mostly on their own. Collaboration is very basic and it usually involves placing or removing objects from the robot’s workspace. However, there is scope for a much deeper level of collaboration, where robots complete complex plans collaboratively with humans and adapt to the changing needs of a plan.

Over the next five years, researchers will work to develop truly collaborative robots by incorporating explicit plans into the programming and giving the robot the ability to detect its position in the plan. Over the next 10 to 15 years this will be expanded to adapt to unexpected circumstances — like missing tools or working with humans who deviate from the plan — and adapting to the capabilities of different operators.

The concept of shared control has been around for a long time in the field of telerobotics. It involves the user having some level of direct control over the robot. For many tasks, it is a more realistic approach than fully autonomous robots as humans are inherently better at some tasks.

Over the next five years, researchers will work to integrate different types of human input and allow users to select the level of autonomy. Over the next 10 to 15 years, they will incorporate learning and fusion of different user inputs.

Current robot interactions happen over very short time periods. For collaborative robots, for example, programming can take only a few minutes and interaction with users is very basic. However, as interaction becomes more complex, the time frames will also increase.

The lifecyle of a robot can be over 10 years, which means that workers could be using the same robot for years. Allowing a robot to adapt to each worker means that it must recognize the worker and learn their work patterns.

For example, imagine that a collaborative robot is working on an collaborative assembly task. Say that one human worker has motor difficulties and works at a slower pace while another worker moves very quickly. The robot should be able to adapt its collaboration speed to make the most of the abilities of each worker, and remember the needs of these workers over many years.

Over the next five years, researchers will work towards maintaining human interactions over long time frames. Over the next 10 to 15 years, this capability will be expanded to accommodate multiple users, allowing robots adapt to users with different capabilities.

Safety standards are fundamental to the future of robot-human collaboration. We have already seen progress in this with the ISO/TS 15066 standard for collaborative robots. This and other standards must be integrated into robotics practice and updated to respond to the changing needs of the robotics industry.

Over the next five years, researchers will work to introduce domain-specific safety standards and test them on specific robotic systems. Over the next 10 to 15 years, this will be expanded to develop industry norms for robot operation and standards for long-term interaction with multiple users.

What Will We See Next?

Due to the unpredictable nature of research, it is always hard to tell which developments will make it to products first. Some of these research trends may take a whole decade or more to make it into manufacturing, while others may be available very soon. However, all eight of these topics have years of research behind them and much progress has been made. It’s not a question of “if,” it’s a question of “when.”