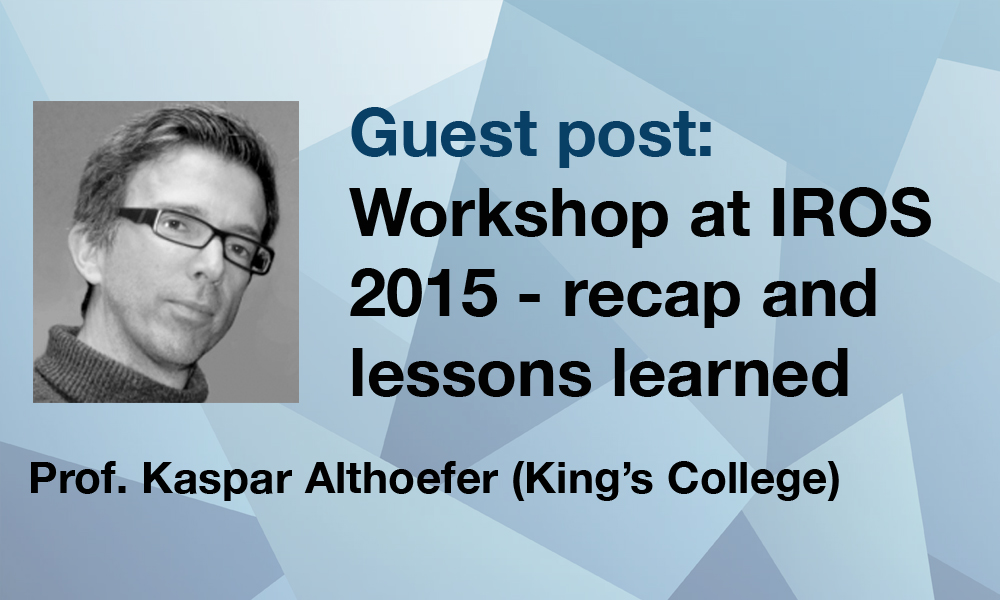 The FourByThree project has the ambitious aim of combining different modalities and innovations achieved within the context of safe human-robot interaction in the latest worldwide robotics research and providing a unified solution for industrial applications. The proposed robotic solution will be a modular system that can be easily customised to fit the end-user’s particular needs, it will be easy to programme and intuitive to use and most importantly, it will be safe. To achieve such goals, partners across 6 European countries, coming from SMEs, research institutions and academia have joined hands and brought forward their own expertise. However, an essential necessity for such a project is to stay in contact with the latest research and to constantly update our goals and expectation based on the latest endeavours of our colleagues in the scientific community.

With this aim in mind, a workshop was organised at the 2015 IEEE/RSJ International Conference on Intelligent Robots and Systems (IROS 2015). IROS is one of the top robotics conferences attended by more than 3000 researchers from all around the world. Selecting this conference as the venue for our workshop provided the opportunity of having top researchers in the field be present at the workshop and get involved in it through speeches, posters and discussions. The workshop was titled “Safety for Human-Robot Interaction in Industrial Settings” and was organised by King’s College London, Tekniker and DFKI – all partners in the FourByThree project. The workshop featured speakers active in industry, robotics safety standards and academic research. A call for papers was also announced with 6 papers finally being included in the workshop. The authors presented their work in the form of a poster preceded by a 3-minute teaser presentation. Initial talks were given by project partners, Iñaki Maurtua and Jose de Gea Fernandez. Iñaki gave an interesting insight into how human workers perceive the robots closely cooperating with them and whether they find it easy to trust the robots or to communicate with them as they would with a human. Jose on the other hand provided a context for the workshop by describing his previous projects and the needs of the industry within the topic area.

Thomas Krüger, our guest from the Volkswagen group talked about motivations for human-robot collaboration in industry along with application within the Volkswagen group with possible future extensions. It was noted that worldwide increase of average age has resulted in an increasing percentage of employees with physical impairments. Hence requirements for improved ergonomics and age-appropriate working environments becomes more prominent. HRC could be viewed as a new approach between manual labour and full automation. With 44,000 robots globally in use at Volkswagen, the highest potential for HRC was deemed to be in assembly and logistics processes. It was observed that reliable operation of HRC systems requires perceiving robots as a support measure, and most importantly, the human worker should define the cycle time, not the robot.

It was Thomas’s assessment that aside from the promising aspects of HRC in assembly and logistics, new challenges have also emerged, which necessitate new concepts and approaches for the planning of work stations. He concluded that for HRC competence, planning work stations need to consider three main aspects: tasks and employees, robots and automation technology technical capabilities, and the overall design of the work station and product.

Thomas mentioned that safety function requirements look into considerations for the collaborative workspace, as well as the transitions between non-collaborative operations and collaborative ones. These shall be designed such that the robot system does not pose unacceptable risks to the operator during the transition. In addition considerations for the collaborative operations were discussed, which may include safety-rated monitored stop, hand guiding, speed and separation monitoring or power and force limitations. Finally, Thomas stated that for verification and validation, the risk assessment(s) should be reviewed to assess if all reasonably foreseeable hazards have been identified and corrective actions taken.

Jose Saenz, our partner from Fraunhofer IFF continued the discussion by presenting their experiences from the VALERI project. VALERI involved the creation of a mobile manipulation platform based on the KUKA lightweight robot for aerospace production tasks. Jose presented IFF’s approach to applying safety standards to this platform through a systematic approach of defining applications and roles, identifying hazard sources, mitigating them and finally verifying their solutions. Novel safety technologies were created for VALERI, in particular, laser scanners for proximity and tactile sensors for contact detection. Other methods involved the use of torque sensing in joints for collision detection as well as optical workspace monitoring. IFF took special care during their design process to follow the relevant ISO and DIN standards particularly in limiting forces (ISO TS 15066 and DIN1525).

After the teaser and poster sessions by the researchers who had submitted their work to the workshop, we moved on to our academic speakers to provide a description of the latest research and innovations in the field. Two of the speakers were collaborators of the SAPHARI Project; an EU funded project completed in 2014 which dealt with safe physical human-aware robot interaction. The first speaker was our colleague, Alessandro de Luca, Professor of Robotics at Sapeinza Universita di Roma. Alessandro is an IEEE Fellow and has published numerous works on physical human-robot interaction and collaboration. His talk in our workshop was regarding sensing, monitoring and control issues in physical human-robot collaboration.

Alessandro spoke about different issues that need to be taken into account during the design of a safe human-robot environment, such as how the robot detects and reacts to collisions, how the workspace or environment is monitored and how intentional and accidental human movements are distinguished. He divided these into three main working modalities. The first being the classical solution of robot safety, such as placing the robot in a cage or to stop its movement when the human is close. The second possibility is coexistence, a robot’s ability to share working environments with humans. The last step is collaboration, an ability to perform complex tasks closely with human interaction and coordination.

Alessandro also emphasized the importance of collision detection without the use of external or contact sensors. One way to do this is by analysing the actuator currents on the robot. The robot’s workspace or environment can be mapped using external sensing such as a camera, RGB-Depth, or laser. Using the information from these sensors, the obstacles around the robot can be localised and avoided. Another important requirement is to distinguish hard contacts from accidental collision and soft or intentional contacts. Alessandro proposed a unique solution without the use of contact sensors, relying on analysing the motor currents using high-pass and low-pass filtering processes. Aside from safety, which is indeed the most important factor, the robot is still expected to perform a task! This requires contact force estimation. Once the force can be estimated, the control scheme can be applied to control the force and perform a desired task. Further details on this can be found on Alessandro’s presentation.

Our second academic speaker was our colleague Sami Haddadin, a Professor at the Institute of Automatic Control, Leibniz Universitat Hannover. Sami was also involved on the SAPHARI project with Alessandro in the past. His doctoral thesis on robotic safety was also published by Springer as a book entitled “Towards Safe Robots: Approaching Asimov’s 1st Law”. In his presentation, Sami delivered a talk on robot motion planning and its relation to injury and pain. Sami emphasised the importance of safe real-time motion planning for the robot to collaborate with a human. He described several techniques to achieve this, such as optimisation-based planning which relies on generating movement by minimising a specific cost function.

To ensure fast calculation and thus real-time performance, he proposed several techniques. The basis for his techniques are the artificial potential fields proposed by Prof. Oussama Khatib in 1986. In this technique, obstacles act as a repulsive surface for the robots while a goal configuration to be reached produces attractive field for the end effector. Sami also presented work which combines this collision avoidance strategy with dynamic movement primitives, which stands for a set of previously defined movements that represent a task or manipulation configuration. The last technique Sami described was a circular field, inspired from the magnetic field in Physics. Sami then concluded his talk by emphasising the importance of connecting injury data with robot motion planning and that more data on how injuries are inflicted and what types of collision will lead to more severe injuries can help in optimising robot motion planning and control.

Figure 2: Sami Haddadin delivering his talk to a full room

The academic talks created a lot of excitement in the mostly academic audience of the IROS conference. The speeches were followed by round table discussion where the audience got the change to freely ask their questions and discuss their thoughts with the speakers from the different areas. An interesting discussion was formed between the audience; Sami as an academic and Thomas Pilz and Federico Vicentini as those experienced in safety standard committees. The consensus was that while safety and its standardisation are indeed important for the continued commercialisation and use of robotic solutions for industry and close collaboration with humans, they should not be what guides the researchers in the field. It should in fact be vice versa, wherein researchers are left free to explore their ideas and innovations to achieve new methods for safety and standard committees should be the ones catching up and updating their standards as necessary.

The workshop concluded after this, with many of the attendants commenting on how useful it had been for them and looking for ways to getting access to the presentations. Smaller discussion groups continued on even after the workshop was officially terminated. This workshop allowed for a very interesting exchange of ideas between different sectors of an area with large implication on the future of robotics, economics and society in general. True collaboration of a human and robot will only be possible through cooperation of us researchers. Workshops like this will need to be followed up and repeated at future conferences. The ideas presented during the academic section of the workshop, combined with the vision put forward by industry experts at the workshop and realised within the scope of the safety standards described by our standardisation representatives can result in working real-life solutions for close physical human robot interaction. Figure 3: Workshop organizers and some of the speakers

This guest post has been contributed by Kaspar Althoefer, Professor of Robotics and Intelligent Systems and Head of the Centre for Robotics Research (CoRe) at King’s College London, with the support of colleagues Ali Shafti, Ali Shiva and Ahmad Ataka.