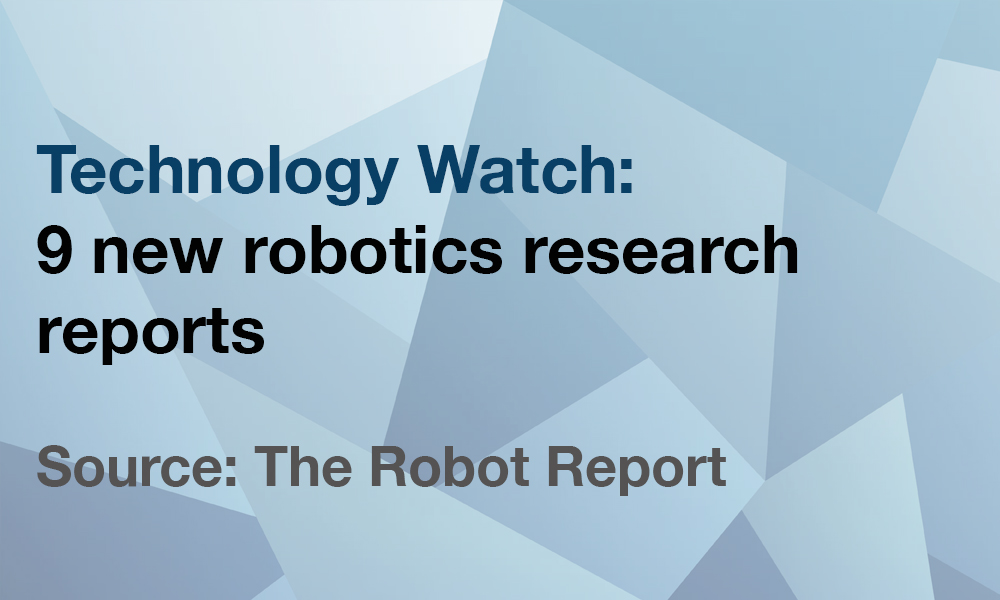 A flurry of 10 costly robotic research analyses offered by a variety of vendors were recapped in a previous post. Here are 9 additional reports for your review and consideration.

[ComputerWorld wrote that Apple supplier Foxconn expects robots to take over up to 70% of its assembly line work within three years. Foxconn CEO Terry Gou confirmed this in news footage. Previously Gou said he hoped to one day deploy a “robot army” at the company’s factories, as a way to offset labor costs and improve manufacturing. Foxconn recently announced that it was using 20M robots in the production of the iPhone6. Consequently reviewing market research reports for tidbits of useful information becomes important to those selling into China but also globally. Here are the most recent research reports that have come across my desk:]

Market Research.com is a US company offering a collection of sourced research products. Global and China Industrial Robot Report, 2014-2017, by Research in China, is a 95-page $2,250 report showing how companies – both foreign and Chinese – are ramping up in China to accomodate an expected growth to over 100M units per year by 2017. Foreign companies with facilities in China: Yaskawa’s new factory will increase output from 3M to 12M; Kuka’s new plant will ramp up to 5M units; Kawasaki will increase from 2M in 2015 to 10M by 2017. No figures were given for ABB and Fanuc although both have extensive sales operations in China. Chinese vendors SIASUN and Anhui Efort project annual production rates of 10M each by 2017.

TechSci Research, an Indian research firm, has a more global 180-page, $3,500 report on the same subject: Global Industrial Robotics Market Forecast and Opportunities, 2020. This report forecasts revenues of over $46 billion by 2020 with Asia representing the largest market with a majority market share in both volume and value. The report further predicts that India, Thailand and Taiwan will escalate as well as China.

Market Publishers, a Cyprus firm sourcing a variety of research reports, is offering Automation and Robots Markets in China, by AMID Co LLC, a $4,000 157-page strategic report focused solely on China. The report includes a producer directory (which you can get free by scouring The Robot Report’s Global Map of robot providers) but also user and producer assessments, growth drivers, and market size data, projections and charts.

Frost & Sullivan, a UK company, has produced a report that analyzes the prospects for the European and North American heavy-duty autonomous truck market in their 108-page $8,000 US Strategic Outlook for Autonomous Heavy-duty Trucks report. The report suggests that autonomous truck capabilities will first appear in the form of truck platooning by 2022. The study period is from now until 2025 with an outlook to 2035.

IDTechEx, a Boston-based company, has two interesting reports, both costing $4,500 each:

TechNavio, a British technology research firm, has produced a narrow-focused 49-page report costing $2,500 entitled: Global Underwater Robotics Market 2015-2019. Underwater robots are found in the fields of maritime security, underwater archaeology, marine biology and the offshore oil and gas market. The report highlighted that the need for undersea mining is propelling the need for remotely operated underwater vehicles that can identify possible mining areas and provide a detailed analysis of the undersea environment prevailing in the mining area. It also emphasizes the growing requirement for underwater robotics for ocean surveillance, which has forced several market vendors and research institutions to develop perpetual underwater robotics for continuous surveillance.

Wintergreen Research, a Boston-based analysis and forecasting company, is projecting significant growth for the agricultural robot market – from $817 million in 2013 to $16.3 billion by 2020 – in their 430-page $3,900 report Agricultural Robots: Market shares, strategies and forecasts, worldwide, 2014 to 2020. 40 companies are profiled. The key to industrial farm robots is keeping costs down and ROI. The report suggests that adapting existing commercial vehicles instead of building new ones is the best way to build viable agricultural robots. This can be seen by reviewing sales of new tractors. Almost 80% come installed with self-driving kits.

Finally, most paid-for research reports use data provided by the International Federation of Robotics (IFR.org) and their annual ‘World Robotics Service Robotics 20XX’ and World Robotics Industrial Robotics 20XX’ reports. Both reports can be purchased and downloaded for roughly $625. Each report recaps significant statistical inputs from industry-based robot associations and their member companies around the world and each provides invaluable detail.

⇐ FourByThree visit to German scenarios
Recognition of Haptic Interaction Patterns in Dyadic Joint Object Manipulation ⇒
© 2022 FourByThree
Powered by IK4-TEKNIKER
This website uses cookies to improve your experience. We'll assume you're ok with this, but you can opt-out if you wish.Accept Read More
Privacy & Cookies Policy