Franka: A Robot Arm That’s Safe, Low Cost, and Can Replicate Itself 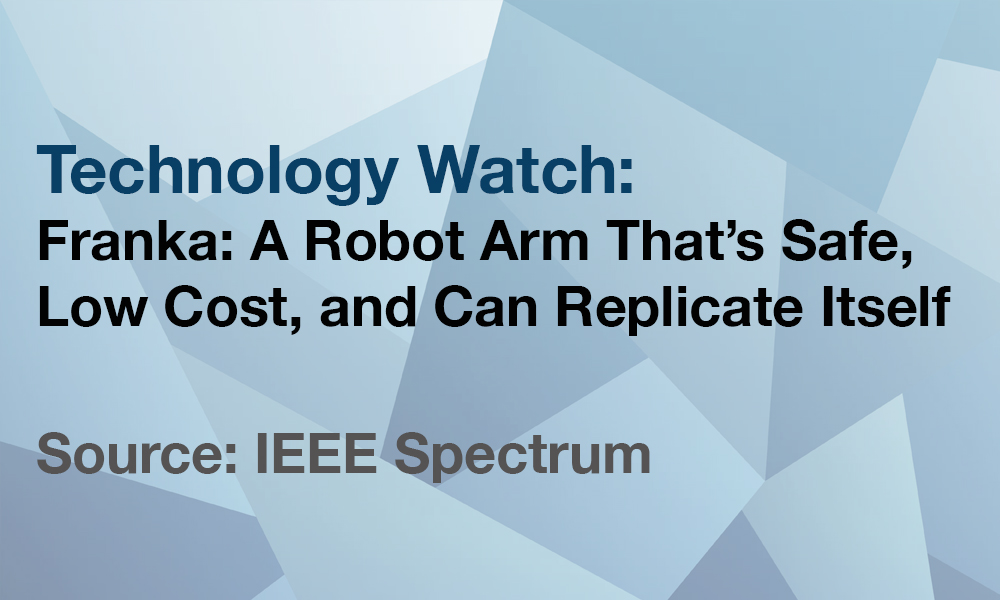 Sami Haddadin once attached a knife to a robot manipulator and programmed it to impale his arm. No, it wasn’t a daredevil stunt. He was demonstrating how a new force-sensing control scheme he designed was able to detect the contact and instantly stop the robot, as it did.

Now Haddadin wants to make that same kind of safety feature, which has long been limited to highly sophisticated and expensive systems, affordable to anyone using robots around people. Sometime in 2017, his Munich-based startup, Franka Emika, will start shipping a rather remarkable robotic arm. It’s designed to be easy to set up and program, which is nice. But what makes it special is that, unlike typical factory robots, which are so dangerous they are often put inside cages, this arm can operate right next to people, assisting them with tasks without posing a risk.

And did I mention that it can build copies of itself? The robot, also called Franka Emika—“It’s like first and last name,” Haddadin explains—is not the only one ever designed to operate alongside human workers. Indeed, this type of system, known as a collaborative robot, or cobot, is one of the fastest growing segments in the robotics market, with global sales expected to jump from US $100 million in 2016 to over $3.3 billion in just five years, according to one estimate.

All the big industrial robot makers are trying to develop their own cobots, but the most innovative designs have come from startups. Rethink Robotics introduced its Baxter dual-arm robot in 2012, and more recently it unveiled a single-arm robot called Sawyer. The cobot sector, however, is currently dominated by Danish company Universal Robots, which ships thousands of robots each year. Even so, such robots remain pretty rare. Expect that to change rapidly over the next few years as Haddadin’s company—which is financially backed by a group of investors that include German robot maker Kuka—and other firms enter the market.

Haddadin, who’s worked at one of Germany’s top robotics labs and had a brief stint at the celebrated robotics company Willow Garage in Silicon Valley, says one thing that will set Franka apart from the competition is its manipulation skills. While some of its specs [PDF]—seven axes of motion, 80-centimeter reach, 3-kilogram payload, and 0.1-millimeter accuracy—are comparable with those of other robots, Franka is designed to perform tasks that require direct physical contact in a carefully controlled manner. These include drilling, screwing, and buffing, as well as a variety of inspection and assembly tasks that electronics manufacturers in particular have long wanted to automate.

Franka has more dexterity than is typical for a robotic arm because it is what is known as a torque-controlled robot. It uses strain gauges to measure forces on all of its seven joints, allowing it to detect even the slightest collisions. In contrast, most industrial robots have no force-sensing capabilities at all—and that’s why they are dangerous: They’ll take you out and won’t even notice it.

One prerequisite for torque control is an extremely detailed model of your robot’s dynamics. You need to factor in even the smallest effects, such as elasticity, vibration, and friction in the components. That’s because torque control works by comparing actual force measurements on the robot to reference values computed from a model in real time. So if your model is off, your control will be off too. Haddadin saw that not as a hurdle but as an advantage. “The truth is, I model the hell out of everything I build,” he says. Gerd Hirzinger, a pioneer of torque-controlled robots and one of Haddadin’s mentors at the German Aerospace Center’s Institute of Robotics and Mechatronics, called Franka a “long-yearned-for breakthrough.”

Another factor that will make Franka stand out is cost. At the time of this writing, the robot was available for preorder at a yet-to-be-confirmed price of €9,900, or about $10,500. That’s a startlingly low figure for such a capable robotic arm. For comparison, Rethink’s Sawyer sells for $29,000, and Universal Robots’ best-selling UR5 costs even more, at $35,000.

Henrik Christensen, director of the Contextual Robotics Institute at the University of California, San Diego, says Franka is “an impressive piece of hardware.” But he adds that with cobots the main challenge is “not just the hardware but also the software to make it easily accessible to nonexperts.” Universal Robots, he says, is “beating the competition by having by far the best user interface.” So that’s an area where Franka will need to prove itself.

Haddadin says his company devoted just as much attention to software as it did to the design of the robot itself. Users can program Franka by moving it with their hands and tapping on a touch screen, with a variety of preprogrammed motions readily available. And once you’ve created a program for one Franka, you can just copy it over the cloud to one or more other Frankas.

But perhaps the most ambitious part of Haddadin’s plan is getting Franka to essentially clone itself. During initial production runs, the robot was performing about 80 percent of the work, but the goal is 100 percent, he insists. Looking further into the future, Haddadin envisions sending containers all around the world as mobile robot factories. “Inside there will be Frankas building Frankas,” he says.

Hordes of self-replicating robots popping up everywhere? For whatever it’s worth, it’s probably a good thing Haddadin is making them very human friendly—even when holding a knife.

This article appears in the January 2017 print issue as “Employee of the Month. Every Month.”