How Collaborative Robots Are Impacting Education 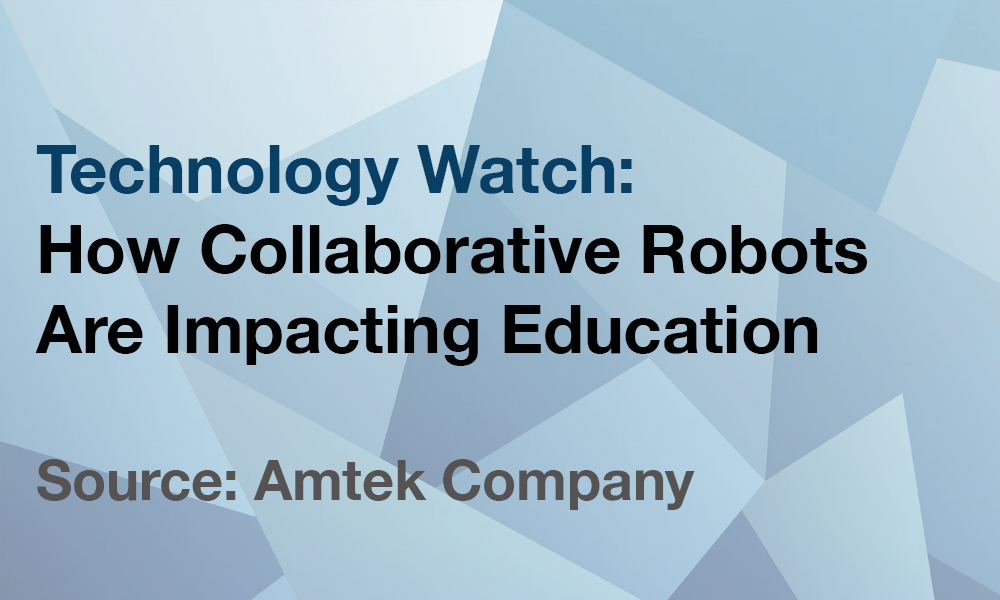 A few weeks ago I was sitting in the waiting room at the hospital receiving an update from one of the surgeons on staff. My wife’s surgery had gone well. It only lasted 45 minutes (as opposed to two hours) and she only lost a teaspoon of blood. I felt a wave of relief.

What had made her surgery so successful was the collaborative robot the surgeon used to perform the procedure. I’ve worked with collaborative robots for some time now, but to experience the benefits in my personal life has given me a new perspective.

Collaborative robots have grown in popularity across several industries over the past several years, especially manufacturing and healthcare. How? Let’s start at the beginning.

Speed and Separation Monitoring robots are designed for occupational safety and are most commonly used in manufacturing environments. They work collaboratively with workers, but have safety precautions built in to keep workers safe.

Imagine a manufacturing environment in which a worker is completing multiple tasks and may need a specific tool for only a few minutes within the day. A collaborative robot could deliver this tool safely, slowing down as it enters the worker’s space, arriving just at the time the worker needs it. The robot helps to speed up the manufacturing process and ensure a safe working environment.

Or imagine a manufacturing plant with a heavy sheet metal press, and there is a pinch point where a worker could easily cut their finger. This is where a collaborative robot could step in and handle the dangerous tasks while workers can handle the next steps in the process.

This is the robot you think of when you hear the term “collaborative robot.” It can work side-by-side with a worker on a specific task without any additional safety devices. It is designed to detect abnormal forces in its path and will stop when it reads an overload.

In the instance of my wife’s surgery, the surgeon used the most widely known medical robot – the da Vinci Surgical System. This system essentially brings superhuman precision to surgical procedures. You can see for yourself in this video.

The cameras on the robot arms can zoom in on microscopic tissues better than a surgeon’s eyes. The result for my wife was a shorter surgery that minimized the effects of anesthesia, shortened her recovery time, and minimized her blood loss.

Universities are studying how to unleash the ultimate potential of collaborative robots across several different industries. They are uncovering new uses and applications, improving existing applications, enhancing robot efficiency, and studying robots’ effects on health and occupational safety in the workplace.

Several universities around the world are studying the use of KUKA’s lightweight, collaborative robot for various medical procedures. The KUKA LBR iiwa is designed to be inherently safe out of the box, without the need for elaborate safety fencing common to many industrial robots. This allows them to work in close proximity with their human operators.

Universities and community colleges also deploy robots, like Universal Robots, to teach students about the up and coming skills and technologies they’ll need to know to enter the workforce. Schools like Johns Hopkins, The University of Maryland, Virginia Tech, Marshall University, and others have collaborative robot education centers that expose students to the robots of the future and offer robotics research opportunities.

Collaborative robots are ushering in the new era of Industry 4.0 and students need to understand the workplace of the future and be prepared to meet the challenges of the coming decades.

cobots, collaborative robots, education, industry 4.0, kuka, universal robots
⇐ Franka: A Robot Arm That’s Safe, Low Cost, and Can Replicate Itself
Optimizing Robots While They Sleep (RobDREAM Project) ⇒
© 2022 FourByThree
Powered by IK4-TEKNIKER
This website uses cookies to improve your experience. We'll assume you're ok with this, but you can opt-out if you wish.Accept Read More
Privacy & Cookies Policy