Origins and Status of the FourByThree Actuators 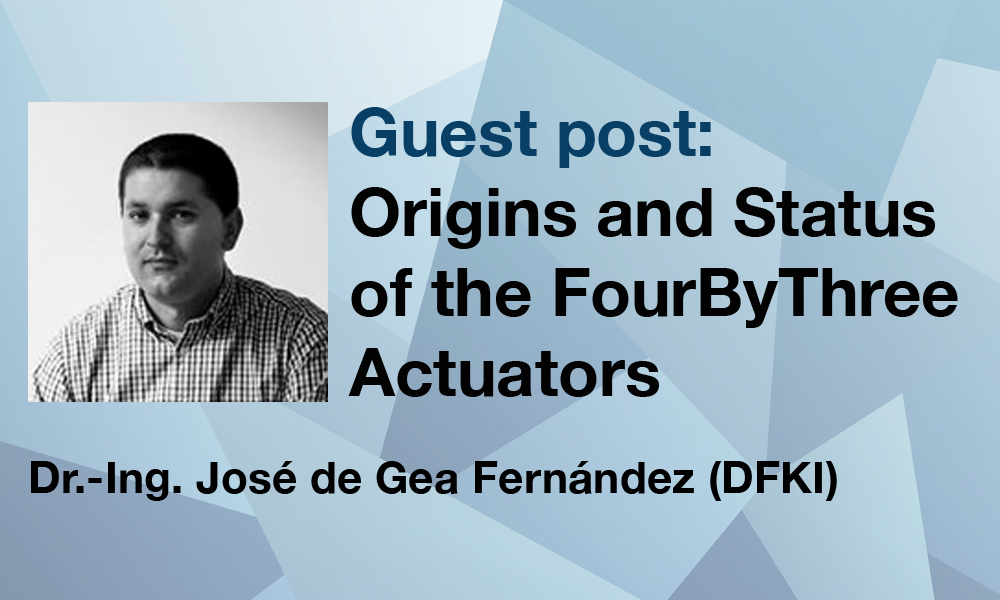 As it is the case in many projects, the initial idea for the FourByThree project came from a brainstorming discussion, in this case, between the project coordinator Iñaki (Ik4-TEKNIKER) and myself. I mentioned that we had just recently developed a new generation of actuators (see Fig. 1) for our exoskeleton in the frame of the project CAPIO (funded by the German Federal Ministry of Research and Education, BMBF, from 01.01.2011 to 31.12.2013). Those actuators had the distinctive feature – in comparison to our previous actuators [1] – of including a mechanical spring in series with the motors [2], thus creating a so-called Series Elastic Actuator (SEA), more especifically in this case, a rotary SEA. In the case of CAPIO, the idea behind it was to be able to measure the joint torques in a relative easy and compact way in order to implement a high-fidelity dynamic control of the exoskeleton system and be able to monitor the maximum torques (for safety reasons). The mechatronic design and its control (a cascade torque / speed control with a flatness-based feed-forward control) worked very satisfactorily and at DFKI we started thinking of using the same principles for building a robot manipulator safe for human-robot cooperation. Fig. 1: Actuator developed in the frame of the project CAPIO

As previously mentioned, the actuators developed in the project CAPIO were not primarily designed as a direct safety mechanism, but as a measurement device. Nonetheless, the fact of being able to measure joint torques allows to monitor their values, thus indirectly providing some inherent level of safety. However, in the project FourByThree, the initial idea was to review the CAPIO design and use it as an starting point for developing a new generation of SEAs, this time, especifically designed for human-robot interaction. In this respect, the mechanical springs should probably be ‘softer’ (have a lower stiffness) to provide a softer contact in case of undesired impact and, additionally, in case of a loss of electrical power, which would hinder other possible sensor-based safety strategies. Lower stiffness would make the actuators safer (to a certain extent), more compliant, and better for a robust and accurate force control but not so precise in positioning. Thus there is a trade-off between required positioning and force control accuracy and compliance. On the other side, and since a lightweight actuator/arm is also a desired characteristic (it decreases the inertia of the system and therefore increases the safety of the overall system), the solution being developed in FourByThree for the elastic element needs to be also light and compact.

An additional requirement used for the development in FourByThree is the possibility to easily exchange the mechanical elastic element for different applications, instead of using a variable stiffness actuator approach, whose features (online stiffness modification) might not be required in many industrial environments and would likely overcomplicate the actuator design (usually requiring a second actuator to alter the stiffness). Furthermore, we are planning to build three different actuator sizes (with torques around 30Nm, 50Nm, and 90Nm at link side) and three spring sets of different stiffness, so that the integrator can pick and mix any of the actuators / springs to build a specific manipulator for the task at hand. The maximum speed is going to be around 15rpm for all the joints, since the use cases in which such robots are going to be used do not require high speeds. Moreover, speed reduction has an important effect on reducing injuries in case of impact. By limiting by design the maximum speed, we achieve intrinsic safety also on that respect.

The current status of the design is that we are pursuing two separate developments with regard to the elastic element. After assessing and ranking a series of possible materials and solutions, we ended up with two promising solutions: option A is very interesting in terms of simplicity and novelty of the solution. However, and due to its novelty, its practical implementation and performance cannot be guaranteed or assessed at this moment without performing practical experiments. On the contrary, option B has been already implemented in other applications, thus there is more knowlegde on how it works and is a less risky option in terms of having a working solution. However, it is a more complex and, possibly, bulky design (see Figure 2). For that reason, we decided to continue both developments in parallel until we can gather more practical information about their performance which allows us to decide for one of them. Fig. 2: Status of the design of the actuator with one of the two solutions
for the elastic element (coil spring) being evaluated

Additionally, a search for commercial safety brakes for robotic systems has been initiated. The safety brakes are used to brake and hold the robotic manipulator in case of a power outage. This is a basic safety measure to avoid the manipulator falling (possibly with a load) and injuring a person. One of the most important criteria will be the compact size; the braking torques are not as high as usually required for those commercial brakes, so probably we will use the smallest among the ones available commercially, likely being adapted by the manufacturer to our needs. It might not be the optimal solution, but the safety brakes do not lie in the main focus of the project. However, they are an additional safety requirement according to industry standards.