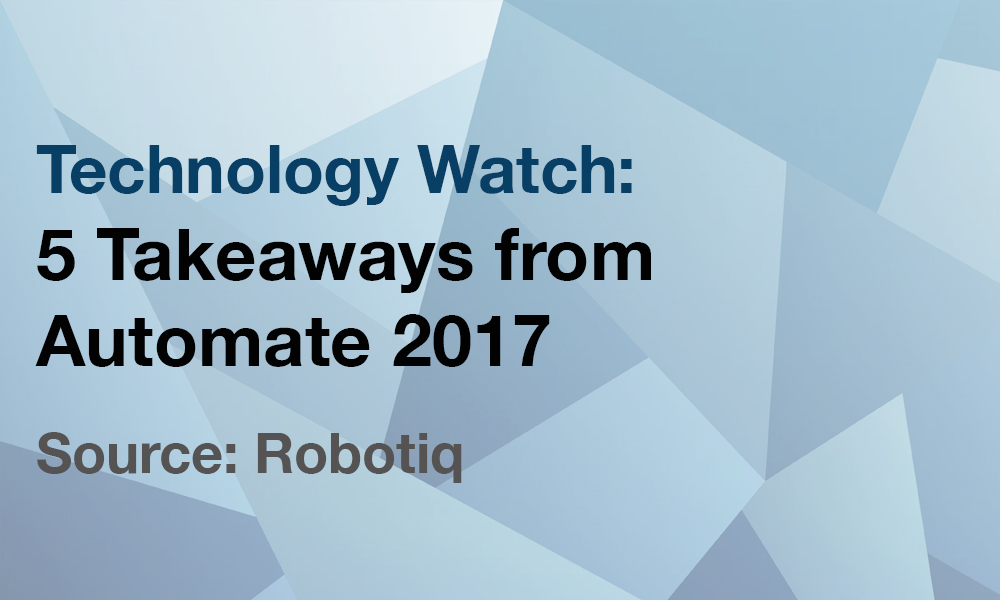 Now that we’ve had time to reflect on Automate 2017, here are our 5 most significant takeaways from last week’s event.

The vast majority of robot manufacturers are providing cloud-based services these days, from simple data backup to cloud-based data analysis.

Probably the most dynamic example of this trend in action is the ‘in.control’ system developed by Tend robotics, which allows you to monitor, control, and train robots remotely via a cloud-based app on your smartphone or tablet device.

The system uses cloud-based image processing to perform optical character recognition, which enables ‘in.control’ to read displays –and, since most of the processing is done in the cloud, massively reduces the amount of onsite processing power required to make the system operable.

New cobot on the block, Techman, which can be programmed via your smart phone, also provides cloud-based services.

All of which leads us to conclude that cloud services are now a standard offering in the cobot sector.

It’s worth noting that there are varying approaches to connectivity among different manufacturers, with some offering strictly limited cloud access.

“The big guys (ABB and Kuka, for example) are very cautious about safety,” says Nicolas Lauzier, Robotiq’s Director of R&D.  “And they tend to use the connectivity mainly for preventive maintenance.”

2. The Rise (And Possible Demise) Of The Teach Pendant

Almost as ubiquitous as cloud-based services is the teach pendant –devices used for programming your robot.

It seems that almost every offering includes a wireless teach pendant these days, but it’s hard to predict what the future holds for these devices, especially with the arrival of snazzy smartphone apps and ‘hands-on’ training methods. Fanuc’s teach pendant is basic, but the company has also developed a “Hand Guidance system” that allows users, by hand, to safely jog or move the robot, teach the robot points on a path, and teach the robot a specific path to take. AUBO’s pendant is fancier, but offers much the same functionality. All the teach pendants we saw offered similar functionality, in fact, but with more and more firms offering smartphone apps and hands-on cobot programming capabiltiies, surely it is just a matter of time before the teach pendant is replaced by these alternatives.

(Check out Robotiq writer Mathieu Bélanger-Barrette’s “The Future of The Robot Teach Pendant” for more.)

3. From Curiosities To Practicalities: Robot Awareness On The Rise

Just a few years ago, a significant number of the visitors at robotics trade shows like Automate spent a lot of time simply admiring the cool technology on display, without quite knowing how it might be deployed.

Visitors still admire the technology, of course —we did too— but at this year’s event it’s noticeable that people are approaching automation as a practical solution to practical problems more than ever before. “Visitors, even those who don’t use robots yet, don’t look at robots as a curiosity anymore. It’s really getting accepted in the mainstream. People understand it’s the way to go and robotics products are getting to a point where they can be deployed,” says Sam Bouchard, CEO at Robotiq.

Nicolas Lauzier agrees:  “I have found that everyone at the show, at least at our booth, were seriously looking for solutions. There were no (or not many) people just looking at “cool stuff.””

“The cobot industry is growing very fast. We saw a lot of new robots about to hit the market,” says Catherine Bernier, Channel Sales Manager at Robotiq. (See: “New Cobots On The Block” for more information.)

Tom Green at Asian Robotics Review described Automate 2017 as “the coming-out party for the cobot (collaborative robot) and its many new, add-on tools and systems.” Green suggests that cobots “are doing for manufacturing what the tractor did for farming in 1890.”

“The place is brimming with cobot everything!” wrote Tom Green. We have to agree. (We could hardly keep up with the number of Robotiq integrations on display, let alone everything cobot-related.)

5. Cobots On The Move

Clearpath Robotics integrated one of its mobile OTTO 100 robot platforms with a UR 5 and one of Robotiq’s 2-Finger Adaptive Robot Grippers.

KUKA showed their iiwa in action. Italian firm Comau introduced the giant AURA cobot, which can work in sync with the firm’s Agile 1500 mobile robot platform.

The various combinations of mobile robotics and cobot arm functionality at Automate provide tantalizing hints of exciting new applications for both sets of technology.

Before I go, this video from our partners at Vicosystems captures the atmosphere of Automate 2017 really well.