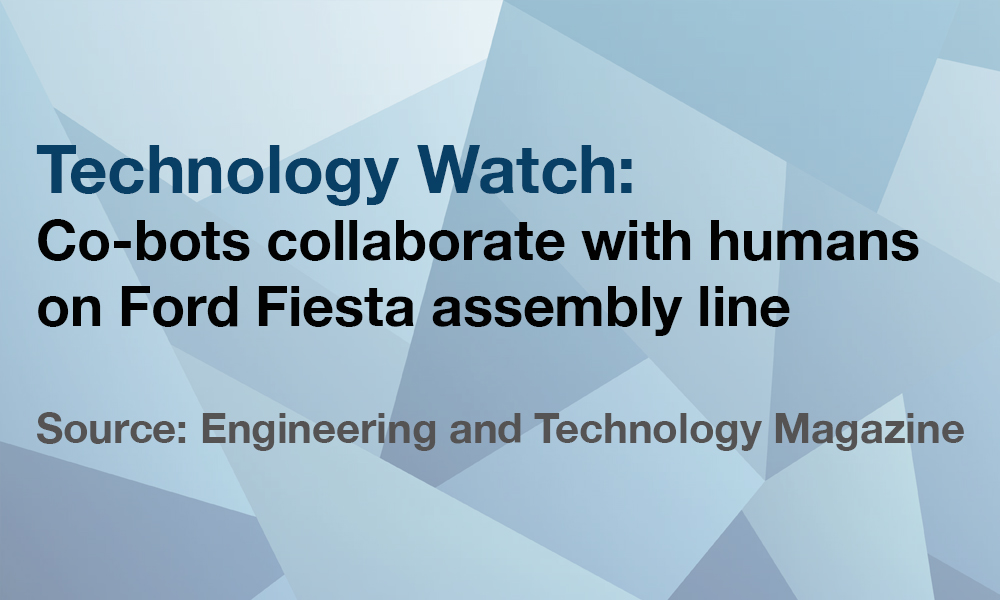 Workers at Ford’s production plant in Cologne, Germany, now have some new colleagues assisting them on the Fiesta assembly line: collaborative robots.

The collaborative robots, known as co-bots, are working directly alongside human workers, helping to fit shock absorbers to Fiesta cars. The task requires pinpoint accuracy, strength and a high level of dexterity, so the Ford human employees work hand in hand with the robots to ensure a perfect fit every time.

The trial at Ford’s assembly plant in Cologne, Germany, is part of the company’s investigations into Industry 4.0, the term coined to describe a fourth industrial revolution embracing automation, data exchange and manufacturing technologies. Ford sought feedback directly from over 1,000 of its production line workers to identify tasks for which the new robots would best be suited.

Just over three feet tall, the new robots work hand-in-hand with the line technicians at two work stations at Ford’s Cologne plant, lifting and positioning the heavy shock absorbers into the wheel arches of new cars.

“Working overhead with heavy air-powered tools is a tough job that requires strength, stamina and accuracy. The robot is a real help,” said Ngali Bongongo, a production worker at Ford’s Cologne plant.

The co-bots are also equipped with high-tech sensors and stop immediately if so much as a finger is detected in their path, ensuring worker safety.

Ford is now reviewing further use of collaborative robots that can be programmed to perform tasks ranging from shaking ‘hands’ to making a coffee. Ford’s robot program was developed over two years in close partnership with German robot manufacturer Kuka Roboter GmbH.

“We are proud to show the capabilities of our new generation of sensitive robots that are supporting and collaborating with Ford workers by carrying out ergonomically difficult and technically challenging tasks,” said Klaus Link, key account manager, Ford, Kuka Roboter GmbH.

“As part of our close partnership with Ford and based on the feedback from employees, we are looking forward to further challenges.”

Similar co-bot technology is already used in the pharmaceutical and electronics industries.

cobots, collaborative robots, ford, kuka
⇐ A proposed unified framework for the recognition of human activity by exploiting the characteristics of action dynamics
Robots At Work: A Look At Robot Safety (infographic) ⇒
© 2022 FourByThree
Powered by IK4-TEKNIKER
This website uses cookies to improve your experience. We'll assume you're ok with this, but you can opt-out if you wish.Accept Read More
Privacy & Cookies Policy