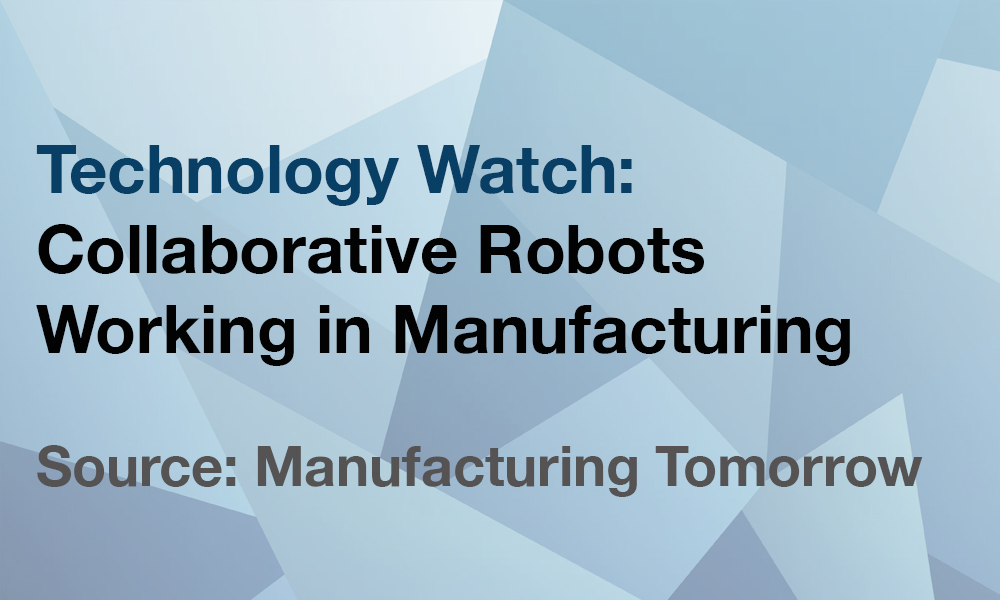 Because cobots are affordable, highly adaptable, and almost plug-and-play, small and medium-sized manufacturers are eager to take on this technology, and some analysts expect that this segment of robotics will see substantial growth.

The Boston Consulting Group predicts that investment in industrial robots will grow 10% each year for the next ten years in the world’s 25 biggest export nations, when the robots will take over 23% of the manufacturing jobs. So far, Robots have taken over only 10% of the jobs that can be automated. RBC Global Asset Management observed that robots can be reprogrammed much faster and more efficiently than humans can be retrained during manufacturing changeovers, with only highly trained humans remaining employed.

There has been much new advancement in robotic manufacturing technology, enabling robot workers to be integrated into the labor force to increase productivity and efficiency. The real challenge is to coordinate humans and robots in close physical proximity under tight time constraints, causing challenges in planning and scheduling along with the design of human/robot interaction. Progressively, more robotic systems are entering the realm previously occupied exclusively by humans. In manufacturing, there is a growing need to integrate robots into the workforce in order to take advantage of the diverse strengths of both humans and robots. This integration requires the timing of human and robotic work so that the tasks are completed within a single shift.

A “cobot” is a robot that works in tandem with a human worker. A Cobot and a human can produce an end result better and faster than either could do working alone. These cobots are usually designed for an explicit task. In one such task, a human worker provides motion power, while the cobot provides guidance, utilizing servomotors. The manufacturing environment has a wide range of potential applications for cobots, such as in an automobile manufacturing plant. In some manufacturing processes, there are applications where it makes sense for workers to perform a task manually. In other applications, the best option is overall automation. Cobots are practical for many of the tasks that fall somewhere in between. In these situations, a worker needs to see, feel and react as needed, but the cobot can handle certain physically taxing motions.

On the more technical side, a cobot can detect nonstandard activity in their work environment and limit its force, allowing close cooperation between humans and robots without any physical separation. All cobots have force sensors in their joints which stops their motion in case of an impact, allowing the robot to operate at full speed without the worry of human injury. There are a variety of cobots from small table-top models to robots capable of moving heavy loads.

Cobots are relatively light weight and can be moved from one work assignment to another. Most cobots are easy to program, using a smartphone or tablet. Just as a power saw is intended to help—not replace—the carpenter, the cobot is designed to assist the production worker. Collaborative robots are generally simpler than more traditional robots, which make them cheaper to buy, operate and maintain.

There are two ways to making cobots safe around their co-workers. If it makes contact with a human co-worker, it instantly stops so that the worker feels no more than a gentle nudge; but this approach limits the maximum weight that the robot can handle as well as the speed. Moving a heavy load at high speed will hurt upon contact even if the robot stops without delay.

For faster and heavier environments, a sensor-based approach is better. Traditionally, physical barriers, such as cages have been used to stop the robot when a person is within striking distance of the robot. Modern sensors now not only sense the presence of a person but their location as well. The robot will operate at full speed when the worker is in the green zone but give a warning; it will reduce speed in the yellow zone, and completely stop when the worker gets too close. The robot can be programmed to move away from the worker or modify its path to go around the worker. Cobots can do anything from moving plastic pieces into milling machines to loading six-packs of beer into crates. They are able to work on items like circuit boards that require finer motor movements, as well as move a circuit board from one spot and insert it into a casing a few feet away. If a casing came down the manufacturing line a few degrees off, a traditional robot wouldn’t be able to adjust, causing a costly delay, but a cobot—such as one from Rethink Robotics—uses feedback mechanisms in its gripper to “feel” its way into the casing, successfully placing the circuit board in the correct spot.

Some cobots are custom fit with four suction cups, to unpack cans of infant formula for a couple of hours, then switch in minutes to working with boxes of vitamins. Robotics companies are integrating other advanced technologies like 3D vision into their robots to help them complete tasks like unpacking pallets of merchandise. The heavy-payload CR-35iA cobot by FANUC does the dangerous and repetitive job of heavy lifting, but a human operator stands by to guide the robot. A factory worker, who works on an assembly line all day, can make his/her job easier by teaching a robot different ways of performing the job, increasing efficiency and enabling workers to improve their work environment.

Trelleborg Sealing Solutions in Denmark went from having no robots to having 42 UR (Universal Robots) robots in 2 years. The robots at Trelleborg enable one worker to manage a cell with eight CNC machines in operation. With an UR cobot in front of a CNC machine, there’s no need for a complex machine interface. Users can teach the cobot how to push the cycle-start button and open the machine door, eliminating much of the wiring and input/output work that comes with most robot installations. Many of the functions usually performed by a machine operator can be learned simply by dragging the cobot’s arm through the desired motions and telling it when to open and close its gripper.

Once a cobot learns a person’s work habits, it can be programmed to recognize that same person, and initialize the appropriate task plan. Workers wear radio-frequency identification (RFID) tags — a way for robots to identify individual workers.

Universal Robots’ collaborative robot arms can handle the assembly of plastics, woods, metals or other materials. If the assembly robot comes into contact with a person, their patented technology limits the forces at contact. UR robots can also be programmed to operate in reduced mode when a human enters the robot’s work area and resume full speed when the person leaves.

Cobots are assistants to factory workers, so productivity goes up. While the robots perform the repetitive jobs, factory workers can be creative and improve the ways to carry out manufacturing. This can make manufacturing more efficient and cost-effective,

Because cobots are affordable, highly adaptable, and almost plug-and-play, small and medium-sized manufacturers are eager to take on this technology, and some analysts expect that this segment of robotics will see substantial growth.

automation, cobots, collaborative robots, manufacturing
⇐ User-defined gestures for controlling primitive motions of an end effector
Robots and humans can work together with new ISO guidance ⇒
© 2022 FourByThree
Powered by IK4-TEKNIKER
This website uses cookies to improve your experience. We'll assume you're ok with this, but you can opt-out if you wish.Accept Read More
Privacy & Cookies Policy