Designing a new generation of modular, flexible and collaborative robots 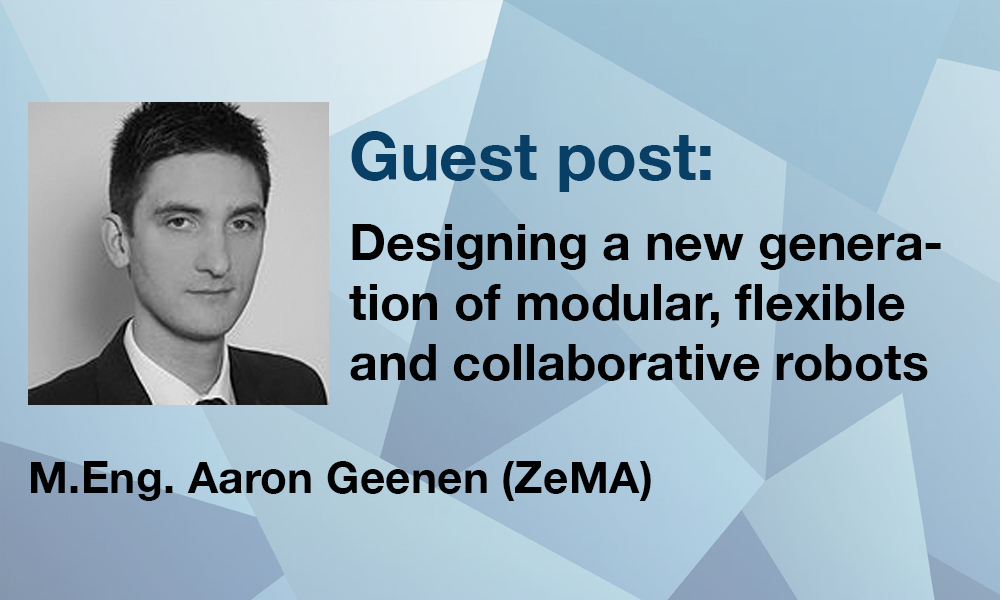 Through several decades of research new opportunities have emerged in automation engineering. These opportunities have led to new robotic and assistive systems that are used to arrange a clear and concise workflow for employees. These systems are used to provide important information to the operator or to aid them in the tasks of acting, sensing, and deciding. Concomitant with current market conditions, the degree of automation has been increasing. However, experience has shown that full automation of production cycles is often inefficient [1]. High numbers of product varieties combined with small batch quantities hold a challenge for the future of automation [2]. To achieve this efficiency, it is necessary to develop flexible and adaptable production systems that can be applied to a variety of tasks [3].

Under the FourByThree research project, research assistants from ZeMA will work on developing solutions suitable for the flexible automation of chosen production processes by means of Human-Robot-Collaboration (HRC). A vital element of the FourByThree project is the development of a unique robotic system that allows for automation to be easy, flexible, and cost-efficient. The most significant advantages of the FourByThree robotic system are safe and collaborative operations, fast initial startup, intuitive controls, and residential mobility. As a result of these features, the FourByThree system allows for human and robotic cooperation in a whole new way. This is achieved through combining the cognitive and locomotive abilities of humans with the pinpoint accuracy and endurance of highly technological robots [4]. To realize this collaboration, the development and implementation of a new robotic design is necessary.

The goal in FourByThree is to develop a new generation of robot systems which is modular, flexible and safe for HRC. Therefore the work package ‘Robot Design’ comprises the subtasks of safety, actuators, control system, interfaces, joining elements, and software (Shown in figure 1). Safety is declared as a general topic because of its importance within HRC. It also, however, influences safe construction of the actuators as well as an HRC design of the interfaces and joining elements. Examples of these include reduced width gaps or curved edges. Next to the modular design of the hardware components, the control system and software will also be desiged to be modular in their components and communication. In brief, using the components developed within the FourByThree project, operators will be able to set up an HRC robotic system that provides for the needs of the application within a short period of time.

The FourByThree robotic system is designed for and influenced by HRC. Unlike traditional industrial robotic systems, the modular robot can be optimally adapted and used for different tasks and applications. The development of designs for the FourByThree robot system is based on target production and also scenario analysis in four pilot studies. These pilot studies involve different industrial sectors which are classified into tasks including welding, riveting, handling, and bolt fitting. The design uses a modular construction kit which is developed according to norms and directives for collaborative robotic systems. This kit consists of major robotic elements such as the ‘base’, ‘joints’, ‘link elements’, and ‘flange module’ (Shown in figure 2). Therefore, depending on the applications, different kinds of robotic systems can be configured using these elements. The setup of the robotic system is based on virtual modeling of kinematics derived from a work space analysis. Using simple calculations, it is possible to determine the custom configuration of the robot system based on the construction kit. Once the application and configuration are known, assembly of the robot with simple joining steps is possible. Directly after assembly, the robot is ready for use. In brief, FourByThree’s robot design allows operators a custom robotic system suitable for a wide range of applications while also allowing for Human-Robot-Collaboration. Within the three years of the FourByThree program, seven robotic arms are scheduled to be tested. Out of these seven robots, three are intended for research and development while four will be put to use according to specific work scenarios. The specifications of these prototypes result from the drives used, which have already been developed by the project partner DFKI. Different robotic structures have been implemented for each of the three existing prototypes (Shown in figure 3). Besides reach and payload distinctions, they also have different degrees of freedom. This displays the system’s modularity as well as its broad range of applications. As described before, this modular and easy to use robot construction kit is designed with HRC in mind. The figure represents the three robot prototypes which were set up in under six months using the FourByThree construction kit. In order to ensure the quality of the modules and accelerate set-up times, different kinds of material were used. Some of these materials include aluminum, CFRP and 3D printings. Other improvements include taking care of safety concerns in the design were to decrease the injury potential by reducing width gaps, implementing covers, and installing security screws next to the safe actuators.

In conclusion, the development and combination of FourByThree’s construction kit for safe HRC allows the operator to quickly and efficiently set up a robotic system on the shopfloor. Based on each projects’ requirements – modularity, safety, ease of use, and efficiency – a new robotic system can be defined. As a result, the operator is able to set up a safe robotic system for Human-Robot-Collaboration which suits their needs in no time at all. Furthermore, the ability to easily reconfigure allows the system to be continually used in different applications. Changing the system specification through adding and removing degrees of freedom or varying the reach of the robot with different link modules gives it this advantage. Due to the system’s reusability, it is not only easy to reconfigure and maintain, but also cost effective.