Rise of the cobot (market analysis and forecast) 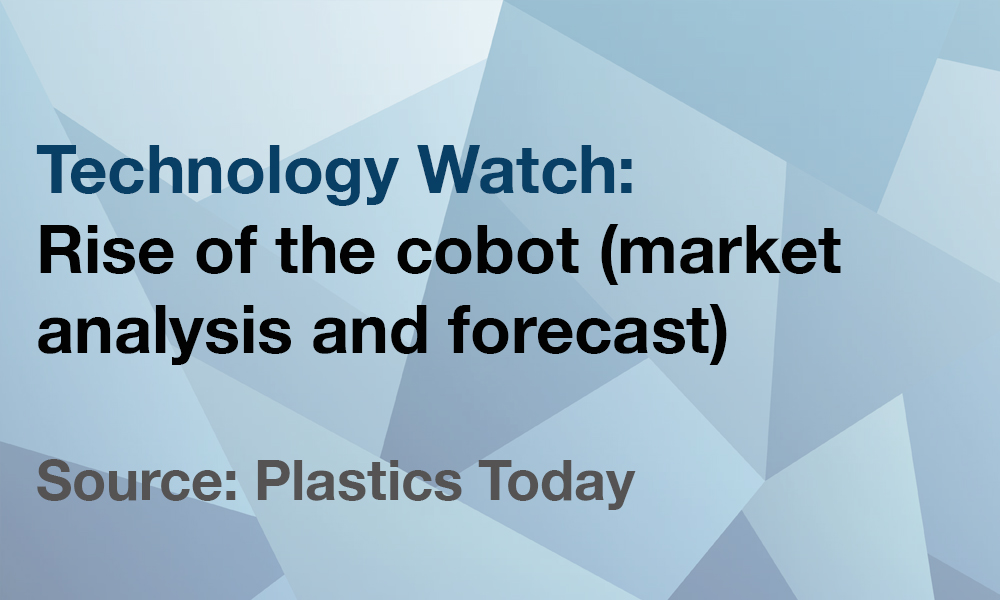 By 2025, the market for collaborative robotics is expected to reach $12 billion

The automation sector had another exceptional year; it’s best ever, in fact. In 2016, the North American robotics market broke all time records for orders and shipments, according to statistics from the Robotic Industries Association (RIA; Ann Arbor, MI). A little more than 34,600 robots valued at approximately $1.9 billion were ordered in North America, representing growth of 10% in units over 2015, according to the RIA. Many of those robots were recruited by automotive OEMs, with shipments into the automotive market growing 25% relative to 2015. In the food and consumer goods industries, orders increased by 32% last year, adds the RIA.

Universal Robots’ arms are designed to automate and streamline
repetitive or potentially unsafe tasks in businesses of all sizes.

Collaborative robots, or cobots, probably did not account for a large piece of that pie—Barclays Equity Research estimates that cobots racked up $120 million in sales in 2015—but their market share is expected to soar in the coming years. Part of the reason is cost, which is expected to decline 3 to 5% annually through 2025, according to Barclays. By that year, the collaborative robotics market is expected to hit $12 billion.

As more and more employees begin to rub shoulders with cobots in the workplace, we thought it might be a good time to speak with someone who knows a thing or two about the technology: Roberta Nelson Shea, Global Technical Compliance Officer at Universal Robots USA Inc. (Ann Arbor, MI). She shared some insights with PlasticsToday on things to consider when planning to purchase a cobot as well as safety issues to keep in mind when deploying them. She will be addressing the latter topic at a session during the Smart Manufacturing conference track at PLASTEC West next week in Anaheim, CA.

Shea sometimes sees two approaches to investing in collaborative robotics, neither of which is ideal. “Some get a cobot without giving any thought about how it’s going to be used ahead of time,” says Shea. And that could be OK, she adds, unless the end effector is a cutting tool, for example, in which case you really have to think about safety issues. “Or they overthink it and become paralyzed by the notion of all the things a cobot can do and don’t know how to move ahead. The best approach is somewhere between these two paths.”

The primary factor to consider when implementing collaborative robotics on your factory floor, says Shea, is to deploy the robot in such a way that it will not hurt someone. Power- and force-limiting features can be built into the robot to ensure protection of human co-workers without relying on the guards and cages of conventional automation systems. Beyond that, you want to limit the areas where clamping occurs, as in pick-and-place applications, and give the robot system (the robot plus the end-effector and part) sufficient space to perform its task.

“Material handling is a typical application, so you design the workspace such that clamping will not occur anywhere but at that specific place,” says Shea. “The only thing you need to worry about is where the end effector interfaces with the part during material-handling operations. And you don’t want to position the robot up against a wall, for example, where a person standing between the robotic arm and the wall could be pushed upon,” Shea adds.

You can use a pendant to program our cobots, says Shea, but most people do it by guiding the robotic arm and mimicking the motion they would make to perform a specific task. That builds in safety in and of itself, she adds. “When you think about how you go about picking up something and moving it from one surface to another, you make a gross movement and then gently put your hand down. If the robot is programmed to make these human-like motions, that lessens the likelihood of the cobot making a hard or abrupt motion that could be startling to a person.”

Plastics processors are finding multiple applications for cobots, some of which are unexpected, says Shea. “Pick and place is the most common task, and some manufacturers have adapted that to testing operations. One application I have seen is the part being removed from a tool and put into a testing fixture. The arm manipulates the part for proper orientation for inspection.

“Another application that I would not have thought of is removing flash, which can be sharp, from a molded part,” says Shea. “The end effector picks up the part and moves it to a grinder or buffing wheel and holds it at a particular resistance.” In this instance, she adds, safety comes from a cobot performing a task that could cause injury to a human worker.

Shea will address multiple safety issues involving collaborative robotics at the PLASTEC West trade show and conference in Anaheim, CA, next week. Part of the Smart Manufacturing conference track, her presentation, “Safety First: Working on a Team with ‘Fenceless’ Robots,” is scheduled for 9 AM on Feb. 7. The show runs from Feb. 7 to 9 at the Anaheim Convention Center.

Also of note: Three collaborative robots from Universal Robots will greet show attendees at the expo entrance. Moving through pre-programmed cycles, the cobot arms equipped with monitors will feature videos of a variety of industrial tasks now handled by Universal Robots, from CNC machine tending to polishing, wire cutting, injection molding and pick & place applications. As in many of their real life installations, the cobots will be placed in a high-traffic area where they will operate with no safety guarding alongside people.