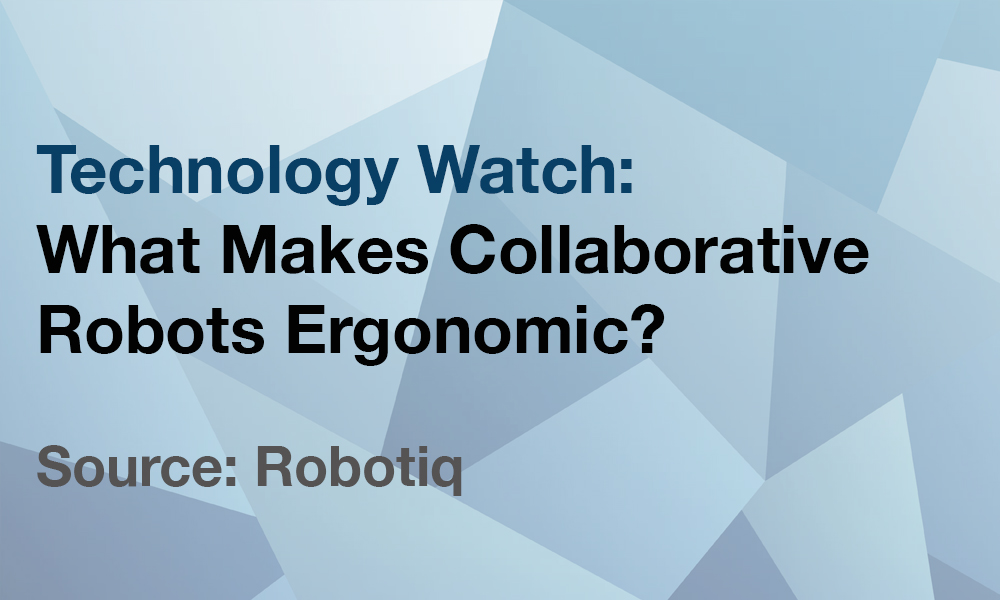 Look at most of the popular collaborative robots and you will notice some similarities: smooth links, rounded corners, and encapsulated joints. To be able to work alongside humans, collaborative robots are designed to be ergonomic. Rounded corners and links ensure that there are no sharp edges which could cause harm if the robot collides with a person. Encapsulated joints provide no pinch points, which could trap a human hand.

In this post we cover the basics of ergonomics and explain how it is an integral part of getting the most from cobots.

The word ergonomics comes from the Greek words “ergo” (meaning work) and “nomos” (meaning laws). The science of ergonomics looks at how products can be designed so that they decrease fatigue and discomfort of human users. It has produced a set of “work laws” which can be applied to reduce injury in the workplace.

In the upcoming International Digital Human Modeling Symposium in June 2016, a paper from researchers at ISIR in Paris explains where collaborative robots fit in to modern workplace ergonomics: “Work-related musculoskeletal disorders (MSDs) present a major health problem in developed countries [and] and affect almost 50% of industrial workers. Assisting workers with collaborative robots can be a solution when a task is physically demanding yet too complex to be fully automatized.”

Collaborative robotics is one tool that we can use in the workplace to combat MSDs, and other health problems which are caused by poor ergonomics. The researchers of the paper are looking at tasks where the robot and human are physically interacting with each other, rather than the robot merely working alongside the human as most current cobots do. Physical interaction introduces some more complications: the robot solves ergonomics problems in the workplace, but it could also itself harm the human if not ergonomically designed. However, ergonomics is important even when cobots are not continually interacting with workers.

We can split collaborative robot ergonomics into two parts:

In the rest of this post, we’ll look a bit closer at both of these.

The Ergonomics of a Collaborative Robot

Ergonomics should be considered for any products which are designed for humans to physically interact with them. We have all experienced using pieces of technology, often cheap, simple ones, which seem to have been designed by someone who has never used the technology themselves. You can usually tell when something has been ergonomically designed because it feels easy to use, almost like an extension of your own body.

Good product designers incorporate ergonomics by looking at the shapes and proportions of the human body. They often use anthropometric databases, which provide average proportions of the body for different populations of people. There are also many useful guidelines on how to design products ergonomically.

Traditional industrial robots didn’t have to incorporate much ergonomics, as they weren’t designed for human interaction. Collaborative robots, on the other hand, must interact physically with people. There are a few ways that they can be designed ergonomically, including:

The more that physical interaction becomes part of collaborative robotics, the more that designers will have to incorporate ergonomic factors into the product design.

The Ergonomics of a Robotic Task

The second ergonomic consideration for collaborative robotics are the ergonomics of the task that the robot is performing. Tasks involving repetitive motions, for example, are perfect for a robot because they are often the type of tasks which can cause humans to develop MSDs and other injuries. Reducing ergonomically-related injuries is one of the top benefits of using collaborative robotics, alongside their productivity benefits. Ergonomics are applicable to many of the tasks which workers carry out in your workplace. Therefore, in order to get the most benefit from a collaborative robot in this regard, you will have to start thinking about the workplace ergonomically. Professionals from the field of ergonomics sometimes talk about having “ergonomics glasses,” by which they mean that you start looking at routine tasks from the new perspective of ergonomics.