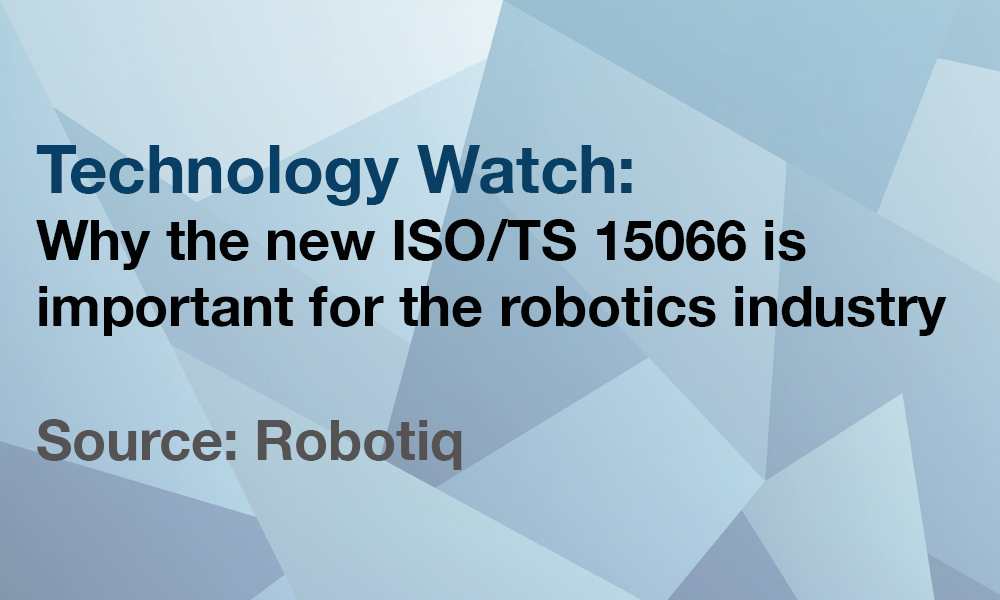 Collaborative robots are relatively new and standards are usually long to write down, so it only make sense to have the new ISO/TS 15066 regulation freshly printed out in the last couple of weeks. As we are working with collaborative robots and are a part of the world of robotics, it makes sense to understand the importance of such a regulation and potential future standard. The regulation hopes to be incorporated into the ISO standard in the future after it has had a chance to be digested and assimilated. In fact, with a regulation that involves so much specific data, we need to take this information and build around it, the same as collaborative robots manufacturers and integrators need to do.

Why is a standard so important?

When collaborative robots were introduced on the market, very few standards or technical specifications were written specifically for robots that could work alongside humans. In fact, we had no idea what force threshold could be applied on a worker in the case of an impact and what speeds would avoid reaching these force/pressure thresholds. Everyone in the industry was in some kind of limbo. Robot integrators were playing it safe, so were robot manufacturers. A lot of different designs were developed and all of them sought approval by some third party, generally a governmental agency, but sometimes an insurance body, in order to reduce or limit liability. Even if collaborative robots were certified, the evaluation criteria were often situational and not particularly specific. They certainly were not standard from one place to another. That being said, even if your robot was approved for your local jurisdiction, this did not necessarily mean that the safety requirements would apply to other jurisdictions or that they would be safe according to the new ISO/TS 15066. So now, with delimitation in terms of force, speed and energy levels, it is possible to define more precisely how safe a robot is for use alongside humans. It is important to note that the ISO Tech Spec Committee specifically wanted to assure everybody that the new regulations are not meant to apply to systems already in place, but should be considered for future cobot systems. The reasons for this are obvious, since they do not want to hinder robotic development, but also because the new regs are only a first attempt to quantify safety requirements and they fully see this as having the possibility of changing as more data is accumulated.

With various companies, countries and organizations being really picky (see picky as a good thing here), the new regulation is good news, since it will be able to draw a line and accept, modify or refuse a robot(s) for their specific application. On the other side of the coin, for robot manufacturers that are not at present compliant with the regulation, they will need to improve their design so they can respect the different requirements of the tech spec. With countries like Germany, car manufacturing companies and other organizations particularly with unions, the tech spec is definitely a game changer, since these companies will all eventually be required to respect these specifications. In the US, ANSI will no doubt follow suit.

What is so different about this regulation? Honestly, nothing so extraordinary was unveiled with this new TS. In fact, it is really just a bunch of grids containing: force, speed and levels of energy, which were analyzed and selected in accordance to the part of the body which came into contact with the simulated robot; taken in the data as a piece of metal, but not necessarily matching the rounded robot arms you find on most cobots. By limiting your robot to these thresholds, you can make your robotic cell, safe. Another part of the regulation refers to the proper way to do a risk assessment for collaborative robots. In fact, the latest documentation to include collaborative robots was the ISO 10218:2011. This was launched in 2011 when collaborative robots were not so popular. Since collaborative robots were merely a thin sliver of the robot market at this time, risk assessments were not very adapted to these devices. Perhaps, you could argue that risk assessments should consider all risks and this shouldn’t change a lot, but the process really is better standardized, so third parties and end-users can rely on it and it isn’t unduly administrative or bureaucratic.

So is my robot still safe or what?

Well, as we mentioned earlier and as the regulation proposes, no robots or robotic devices prior to the launch of this regulation need to answer to these new requirements. This means that all the new robots that will come out will no doubt answer to the Tech Spec, but all the robots that were designed prior to this date are not obligated to be modified to answer to the new specs. So your robot is as safe as it was before. Simply, you cannot say that your robot is ISO/TS 15066 compliant. Or maybe you can if you redo your risk assessment with the new specs in mind, especially since many collaborative robots have programming adjustments which could make them compliant.

Are there other tech specs on the ISO agenda?

I have heard about other areas where specs or regs concerning collaborative robots and their accessories were about to start being investigated. However, I do not expect them to be released any time soon, perhaps over the next 2 years or so we will start hearing more about this. For the moment, this new Tech Spec will give anyone in the industry plenty to absorb.

Where can I get this Tech Spec?

If you are interested in reading or referencing this standard you should download it from the ISO store. However, if you are not interested in going into deep detail on this tech spec or having the information straight from the horses’ mouth; we have created a ‘starter kit’ for anybody who would like to do a risk assessment with their collaborative robot. We also have previous articles on the Tech Spec and the importance of risk assessments.

At the end of the day, like any other regulation, this Tech Spec is important because companies require safety standards to keep their employees safe. This might also be a game changer in terms of robot sales as everyone will want robots that meet the new specs. But, having or not a robot that meets this safety spec is probably more a shorthand, since companies or small businesses have the leeway to incorporate other safety factors into their robot cell to make it compliant. I don’t see how this will affect individual robot sales in the short term, since there are many ways to make your robot compliant. So to answer the starting question: Why is the new safety regulation important for the robotic industry? This will certainly affect the new robots coming onto the market over the short term, as we in the industry get the new specs sorted out. What do you think? Let me know your opinion in the comments section.

Robotiq is a robotic tool and sensor manufacturer who works closely with many different collaborative robot manufacturers and integrators.