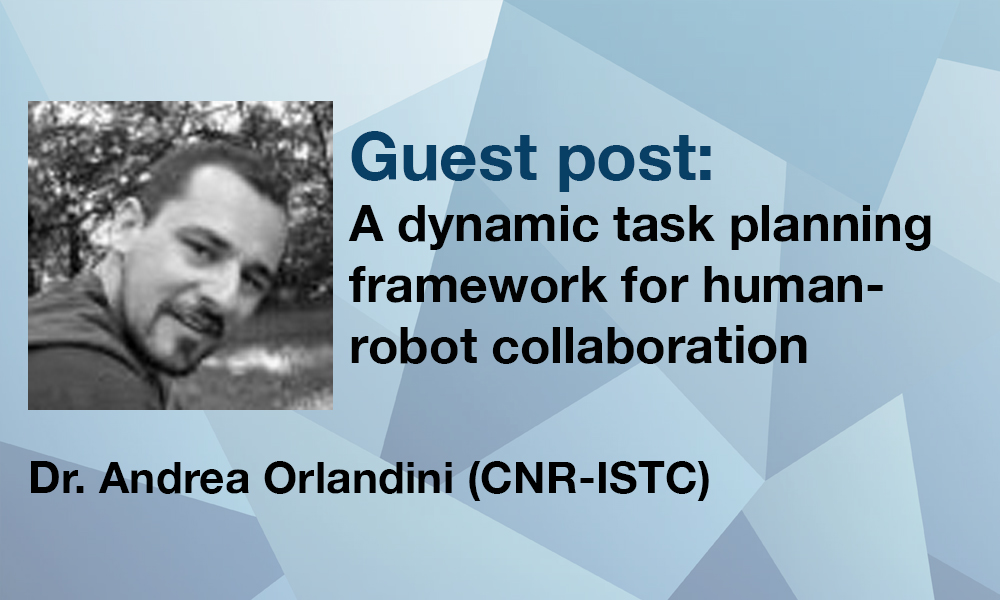 The diffusion of lightweight robots is widening the opportunities of their use in manufacturing cells. In particular, the hardware adaptability to different operative conditions enables new challenging scenarios like, for example, those of co-presence of robots and human workers performing together repetitive, cooperative and physically demanding tasks in a shared space. Such new scenarios clearly pose new challenges and requirements to software controllers governing robots.

To this aim, the FourByThree project has fostered the development of new Artificial Intelligence (AI) technologies for flexible decision making enforcing innovative solutions for robust performances in Human-Robot Collaboration (HRC) scenarios [1]. More specifically, among the innovative software solutions proposed by FourByThree there is the dynamic task planning system called PLATINUm [6]. This system has been developed for enabling flexible, safe and efficient collaborations between humans and robots. The specific objective is to realize a high-level controller capable of dynamically adapting the behavior of the robot to the behaviors of human workers.

The use of the FourByThree AI planning software enables the deployment of flexible controllers capable of preserving productivity as well as enforcing human safety. Specifically, Human-Robot Collaboration (HRC) challenges concern both physical interactions, guaranteeing the safety of the human, and dynamic coordination of activities, improving productivity of the cell and contributing also to the satisfaction of the worker with respect to task distribution. It is worth underscoring Flexibility is a key feature of robot controllers in HRC scenarios where robot motions must be continuously adapted for the presence of the human, which is an uncontrollable “agent” in the environment.

This presence entails the ability of evaluating robot execution time variability and standard methods are not fully effective. Indeed, current techniques do not foresee/estimate the actual time needed by robots to perform collaborative tasks (i.e., tasks that directly or indirectly involve humans). Robot trajectories are computed online by taking into account the current position of the human and therefore it is not possible to know in advance the time the robot will take to complete a task. Thus, it is not possible to plan robot and human tasks within a production process and take into account performance issues at the same time.

The figure below shows the Dynamic Task Planning Architecture developed for FourByThree by CNR-ISTC. The architecture shows the elements and the actors involved within the control loop as well as their relationships. Specifically, the labeled arrows describe all the phases of the control process starting from domain modeling up to physical task execution. The FourByThree Engineering Environment relies on KEEN [2] to support domain experts in the design of the control model exploited by the FourByThree Controller to coordinate the human and the robot tasks. Specifically, the FourByThree Engineering Environment allows the Production Engineer and/or the FourByThree Knowledge Engineer to model the working environment and the production processes without knowing in detail the specific planning and execution technology utilized. Once the model is defined, the FourByThree Task Planner synthesizes a temporal flexible plan assigning tasks to the human and to the robot. The FourByThree Task Planner relies on the timeline-based framework EPSL [3] which complies with the formalization proposed in [4]. Specifically, the developed task planner is capable of generating temporally robust plan by dealing with temporal uncertainty at solving time. Thus, the temporal plans can be adapted at execution time according to the observed behavior of the human. This is crucial in the considered scenarios where the Human is modeled as an autonomous and uncontrollable agent whose behavior may affect the behavior of the Robot.

The generated plans are then executed by means of the FourByThree Plan Executive which has been developed by extending the EPSL framework with execution capabilities. The FourByThree Plan Executive dispatches commands to the robot and to the human and receives feedbacks through dedicated (ROS-based) communication channels. Thus, the FourByThree Plan Executive realizes a closed-loop control process with the human-in-the-loop. Broadly speaking, the executive is capable of dynamically adapting the plan (i.e., robot operations) according to the detected behavior of the human during the execution of the working process. The executive can temporally adapt the plan by absorbing execution delays or, if necessary, generating a new plan through replanning. Replanning allows the executive to manage exogenous events that the plan cannot capture (e.g., a failure of a robot actuator or a human task whose duration is longer than expected) by generating a new plan and trying to complete the execution of the process. It is worth pointing out that the integration of temporal uncertainty at both planning and execution time makes the control process more robust than classical approaches in the literature.

The PLATINUm system has been also deployed to provide an innovative integrated motion planning and scheduling methodology that provides a set of robot trajectories for each collaborative task as well as a temporal interval of the robot execution time for each trajectory and optimizes, at relevant time steps, a task plan, minimizing the cycle time through trajectory selection, task sequence and task allocation. The application of the approach to an industrial case is presented and discussed in [5].

This guest post has been contributed by Dr. Andrea Orlandini, research fellow at the Institute of Cognitive Sciences and Technologies (CNR-ISTC), in Rome (Italy).

andrea orlandini, dynamic task planning, guest post, human-robot collaboration
⇐ Robots are popping up in small U.S. factories
This robot arm’s AI thinks like we do about how to grab something ⇒
© 2023 FourByThree
Powered by IK4-TEKNIKER
This website uses cookies to improve your experience. We'll assume you're ok with this, but you can opt-out if you wish.Accept Read More
Privacy & Cookies Policy