Robots are popping up in small U.S. factories 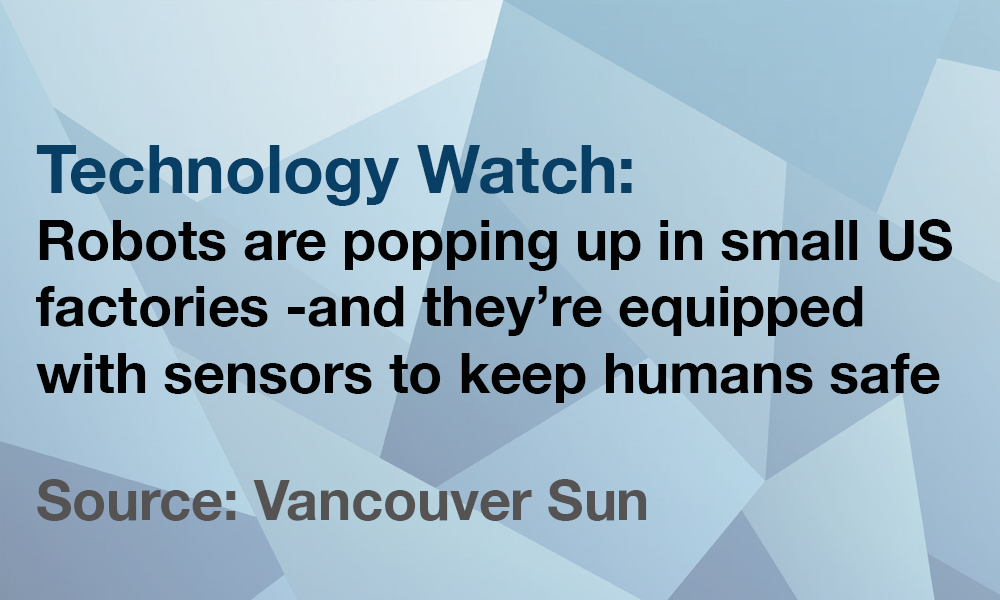 Robots are popping up in small U.S. factories — and they’re equipped with sensors to keep humans safe.

Robots are everywhere. They’re stocking shelves, pruning trees, making cocktails, delivering room service. Now they’re even showing up for work in some of the smallest factories, in a boost for manufacturing in the U.S. and a potential new threat to traditional production-line jobs.

An employee touches the hand of Pepper the humanoid robot, manufactured by SoftBank Group Corp., at the Orange Arch Inc. offices in Tokyo, Japan, on Monday, Oct. 5, 2015.

The robotics wave began sweeping into automobile and other plants decades ago, stopping short of shops staffed with a relative handful of people. Many businesses couldn’t afford the contraptions, which weren’t designed to squeeze into tight spaces or operate very close to human beings.

Technological advances have made industrial robots more compact and kinder. Collaborative models, members of a new generation called cobots, have sensors to prevent them from harming real-life colleagues. They’re also easier to set up and cheaper — the price can be as little as US$25,000.

“It’s just being brought down to an affordability level that gets to the smaller manufacturer,” said Stewart McMillan, chief executive officer of Task Force Tips Inc. “You can sit down with these things and, in a matter of minutes, watch a couple of YouTube videos and know how to do basic programming.”

At Task Force Tips, which makes fire-hose nozzles, a vision-guided robot performs a task a person used to do, grabbing a half-finished valve from a miller and handing it off to a mechanized partner that feeds it into the final processor. By adding a dozen bots over the past four years, McMillan said, he’s been able to keep the family business thriving in the face of stiff competition from lower-wage countries including China.

And the company payroll in Valparaiso, Indiana, has stayed steady at about 250. Task Force Tips doesn’t fire anyone when it brings in a robot, McMillan said. Instead, people are re-trained for jobs such as machine operator or technician. That keeps morale up and allows employees to see the machines as an advantage, gadgets that can do menial chores humans find tedious.

That’s not what happens in every factory, of course. Automation has generally been a drag on low-skilled employment, and predictions are robotics will change the future of labor so dramatically that as many as half of the jobs that exist today are at risk. Economists from the Massachusetts Institute of Technology and Boston University recently concluded both jobs and wages fall in parts of the U.S. where more robots are installed.

At the same time, while technological advances kill some jobs, they generate others. A Boston Consulting Group study focusing on Germany concluded intelligent automation will crowd out about 610,000 factory slots — but create 960,000 new positions. And automation is a big driver of productivity, which allows wages in general to rise.

“Everyone is bemoaning the stagnation of productivity improvement in the U.S. and we aren’t seeing other things that are improving that output per worker,” said Brian Carlisle, co-founder of Precise Automation in Freemont, California. “Robotics has the potential to do that over the next few years.”

For small-plant managers, the machines are tough to resist, especially now that they’re more affordable. They can toil around the clock and never call in sick. They also perform duties that people simply won’t.

Brendan Cahill founded PTG Silicones Inc. in 2007 with a mostly automated assembly to pump out silicon products like flow-control valves and sealing components. He started with people manning the molding machines — monotonous and dangerous work with operations blasting at temperatures of 176 degrees Celsius.

“I would look out the window at 7:30 in the morning and keep my fingers crossed and hope that one of the people who we hired to be a machine operator would come to work,” he said. “You can’t run a business like that.”

So Cahill installed five Staubli Corp. bots. A sixth is on the way. They pull silicone flapper seals from the molding apparatus and dump them in a bin, every day of the year. The New Albany, Indiana, company employs nine people, mostly managers and technicians. Only bots are on site for the third shift.

For all the inroads, it’ll be years before automated workers are commonplace in smaller factories. After all, mainframe computers first appeared in some offices in the 60s and some personal computers were available by 1975, but it wasn’t until the mid-90s that PCs began to populate most workstations.

“There’s lots and lots of small and medium businesses that do not have any robots at all,” said Scott Eckert, CEO of Rethink Robotics Inc. in Boston. That, of course, is opportunity for his company and others making the latest learning machines. As it is, sales of cobots are moving up at a 75 per cent clip, said Jurgen von Hollen, president of Universal Robots A/S. Overall, industrial robot sales are growing at about 15 per cent annually.

At Plastic Molding Technology Inc. in El Paso, CEO Chuck Sholtis has ordered a US$40,000 Universal Robots device to do pick-and-place work at his factory. It’ll help him compete with rivals in Mexico, Sholtis said, and some of his 100 employees will be freed up for more creative work. Like McMillan at Task Force Tips, he said he doesn’t anticipate letting anyone go. “We’re not giving the good jobs to robots.”