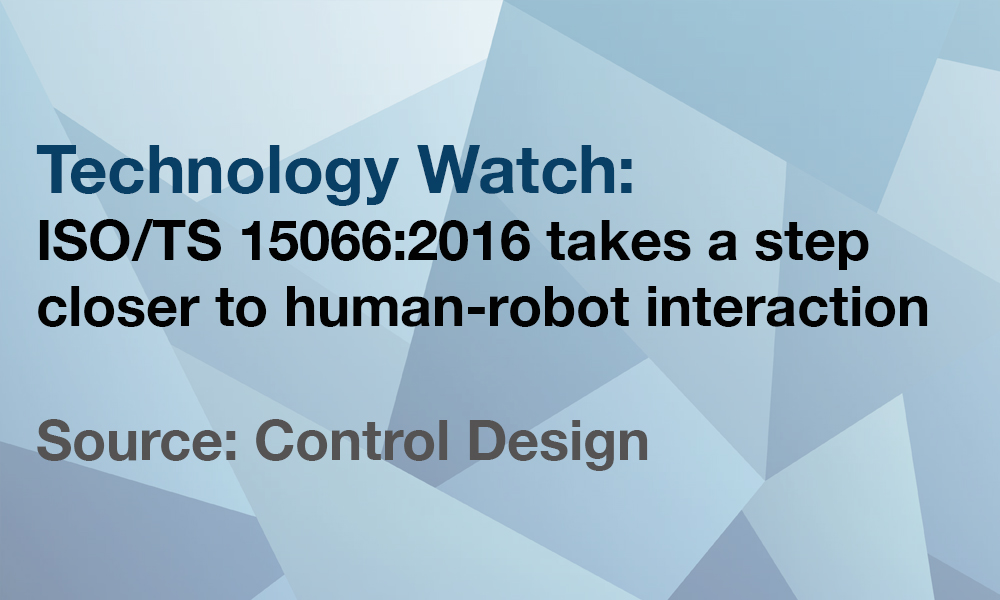 The first solid step toward ensuring the safety of human workers in a collaborative robot system is TS 15066, a technical-specification (TS) document that provides supplemental and supporting information to the industrial robot safety standards ISO 10218-1 and ISO 10218-2, which were published in 2011. This technical specification applies to how humans work with or, rather, how closely they work with the collaborative robot system, specifically.

What is a collaborative robot application?

Collaborative robots actually refer to a robot system, rather than a particular type of robot. With a collaborative robot application, humans and robots can occupy the same workspace at the same time while the system is in automatic mode. There are still safeguards and a risk assessment required, in accordance with the robot system safety standard ISO 10218-1 and -2:2011. For now, the collaborative workspace will most likely be a small defined space with familiar fencing or other safeguards surrounding the rest of the robot.

What makes the collaborative robot safe for human interaction?

When implemented according to the guidelines in ISO/TS 15066, the collaborative robot system might utilize one or a combination of the following:

Traditionally, robot systems and people have been separated with various guards, fences and protective devices. But, thanks to TS 15066, scenarios have been determined where people and robots can work more closely together.

The ISO/TS 15066 standard provides safety requirements specifically to robot suppliers and integrators on using collaborative industrial robot systems. The standard will work as a foundation for the next series of developments within the collaborative robot industry.

TS 15066 combines key information that is both new and previously established into guidance for the design of collaborative robot systems, including important aspects, such as:

How will this impact the industry?

Power and force limiting, as well as speed and separation monitoring, are now being accomplished with existing technologies; however, future technology will most likely result in even more breakthroughs. This will most likely pertain to protective devices with tighter integration, such as when the robot system’s motion is integrated with a protective device that detects intrusion and presence in the shared workspace. This could mean a future consisting of a barrier-free workspace for the human and robot system.

A hard copy of ISO/TS 15066 can be purchased from the RIA Online Store.